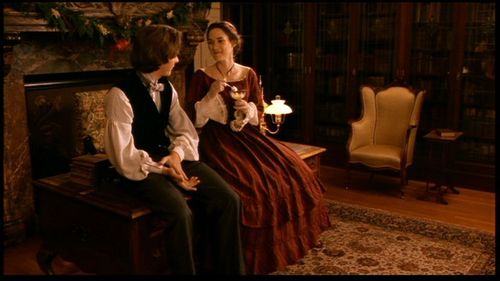 In Chapter 3: The Laurence Boy, Jo officially meets Laurie for the first time at a New Year's Eve party at the home of Meg's friend Sallie Gardner, where Jo is hiding behind a curtain. Best wishes for a Happy New Year to you all! --Kim

Meg knew Sallie and was at her ease very soon, but Jo, who didn't care much for girls or girlish gossip, stood about, with her back carefully against the wall, and felt as much out of place as a colt in a flower garden. Half a dozen jovial lads were talking about skates in another part of the room, and she longed to go and join them, for skating was one of the joys of her life. She telegraphed her wish to Meg, but the eyebrows went up so alarmingly that she dared not stir. No one came to talk to her, and one by one the group dwindled away till she was left alone. She could not roam about and amuse herself, for the burned breadth would show, so she stared at people rather forlornly till the dancing began. Meg was asked at once, and the tight slippers tripped about so briskly that none would have guessed the pain their wearer suffered smilingly. Jo saw a big red headed youth approaching her corner, and fearing he meant to engage her, she slipped into a curtained recess, intending to peep and enjoy herself in peace. Unfortunately, another bashful person had chosen the same refuge, for, as the curtain fell behind her, she found herself face to face with the 'Laurence boy'. Keep reading.
Posted by Kim at 2:46 PM