In a Drood Mood

Special thanks to my co-blogger, Kim, for sweetly gifting me a copy of Dan Simmons' Drood. I have to admit the book's heft intimidated me, but I devoured the first chapter last night and am hooked! The book paints a fascinating portrait of Charles Dickens (so timely this spring) and is cleverly and cuttingly narrated by the author's onetime collaborator, Wilkie Collins (The Woman in White). So far it's funny and suspense-filled and a little bit horrifiying, and I'm sure I'll tear through all seven hundred-odd pages in no time before passing it back to Kim.

The book's set to be adapted by none other than director Guillermo del Toro, of Pan's Labyrinth fame.
Posted by Amy Helmes at 8:47 AM 1 comment:

Debt, Little Dorrit, and You 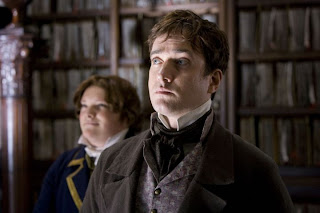 Amy and I were thrilled to post our thoughts on the first episode of Masterpiece Theatre's Little Dorrit on one of our very favorite blogs, The Egalitarian Bookworm.
Posted by Kim at 5:17 PM No comments:

Blame It On Shakespeare

I've always thought it I ever bumped into Ben Kingsley in public I would probably meekly cower in the corner or scream and run away. Maybe it was his badassity in Sexy Beast... Maybe it was because he played such an a-hole when he cameo'd as himself on "Entourage..." And as someone who has interviewed less than cooperative actors in my day, I can sympathize with how the Guardian's Rachel Cooke was a little freaked by the prospect of interviewing Mr. Ghandi himself. So it was with great pleasure that I read her interview and discovered that, contrary to both of our preconceived notions, he's actually something of a teddy bear! The image of him with a ziplock bag of Fisherman's Friends took the scary away, just like that!

He gives some props to Shakespeare, and I was hoping he'd talk about his role in Christopher Rush's "Will," (a fictional account of the Bard's deathbed meeting with his lawyer to discuss his last will and testament) but no such luck. We'll just have to wait for more news on that one.
Posted by Amy Helmes at 1:48 PM No comments:

Finally! The long-awaited production of Little Dorrit begins on Sunday night. Amy and I will be contributing a guest post on the first episode at The Egalitarian Bookworm. Go here for details. --Kim
Posted by Kim at 8:41 AM No comments:

This news of a film version of the HBO Rome series is music to my ears. Too bad, presumably, no Ciaran Hinds, since Caesar got eighty-sixed already in the series.
Posted by Amy Helmes at 2:47 PM No comments:

I loved Beverly Cleary books when I was a second grader, and it's about damn time Ramona the Pest got some screen time. That said, I never imagined, when I was reading the books, that she had a couple of hotties for parents. Corbett and Moynahan? Seriously?
Posted by Amy Helmes at 4:27 PM 1 comment: