Dark Horizons reports that Damien Lewis (Better known as Soames Forsyte to Masterpiece Theater freaks), Daryl Hannah, Virginie Leyoden, John Malkovich, Peter O'Toole, Saffron Burrows, Vincent Perez, Michael Madsen and scads of other folks are set to appear in "Love and Virtue," a period film set during the reign of King Charlemagne and based on the legends "The Song of Roland" and "Orlando Innamorato." -- Amy
Posted by Kim at 3:26 PM No comments:

Never thought The Tom Green show would be a source for literary adaptation news, but ...

Val Kilmer was a guest on the show recently and announced he was writing a screenplay about Mark Twain and Christian Science founder Mary Baker Eddy (with whom Twain seemed to have had a love/hate fascination.) "Its a dual biography of a fantasy love story," explained Kilmer, who even displayed a cellphone picture of himself decked-out like Twain, leading us to presume that he'll be playing the part of the hoary-haired American author. "He seemed to understand something interesting about every subject...He was the most famous American in the world [in his day]," Kilmer added. While I have my doubts that this will ever actually come to fruition, I'll happily give Kilmer credit for being more literary-minded than I had imagined him to be.

As a trivial aside, how much does he look like John Denver in this photo? -- Amy
Posted by Kim at 2:59 PM No comments: 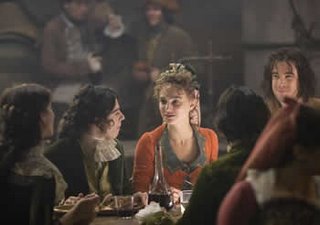 While a review in Variety gives Goya's Ghosts high marks for being visually stunning (what else would we expect from the director of Amadeus and Valmont?), it offers only a so-so opinion of the film's storyline. Stellan Skarsgard plays the renowned painter and Natalie Portman his beloved muse, who is labelled a heretic and imprisoned by a righteous-but-vengeful monk (Javier Bardem) during the Spanish inquisition. (In a curious casting note, Randy Quaid plays the Spanish monarch, King Carlos IV.) 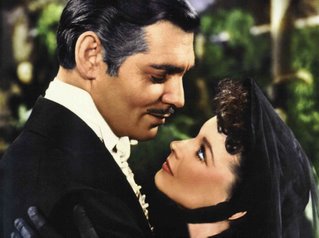 Studio 360 has an interesting segment on Margaret Mitchell's "Gone With the Wind," its racial politics and why the story continues to resonate with readers and viewers today. Listen here.

After reading some trivia about the film, I was intrigued by this tidbit from imdb.com:

In 1939, the Hollywood Production Code dictated what could and could not be shown or said on screen, and Rhett Butler's memorable last line raised red flags. A few of the suggested alternatives were "Frankly my dear... I just don't care," "...it makes my gorge rise," "...my indifference is boundless," "...I don't give a hoot," and "...nothing could interest me less." Although legend persists that the Hays Office fined Selznick $5,000 for using the word "damn", in fact the Motion Picture Association board passed an amendment to the Production Code on November 1, 1939, to insure that Selznick would be in compliance with the code. Henceforth, the words "hell" and "damn" would be banned except when their use "shall be essential and required for portrayal, in proper historical context, of any scene or dialogue based upon historical fact or folklore . . . or a quotation from a literary work, provided that no such use shall be permitted which is intrinsically objectionable or offends good taste." With that amendment, the Production Code Administration had no further objection to Rhett's closing line, "Frankly, my dear, I don't give a damn."
-- Amy
Posted by Kim at 3:48 PM No comments: 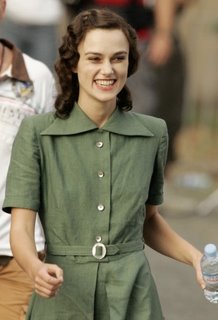 The Keira Knightley fan site Walkingindaydreams.com has behind-the-scenes pics of the actress filming the adaptation of the Ian McEwan novel, Atonement. Knightley plays Cecilia, a young woman whose world is turned upside-down after her confused little sister, Briony, catches her in flagrante with her boyfriend, Robbie (played by James McAvoy). Romola Garai, Brenda Blethyn, Vanessa Redgrave, Benedict Cumberbatch (of the latest Materpiece Theater offering, To The Ends of the Earth) and Gina McKee (Irene Forsyte of The Forsyte Saga) also star in the 1930s-era film, which is slated to hit theaters in August of next year. -- Amy
Posted by Kim at 11:16 AM No comments:

Angst in the Time of Cholera 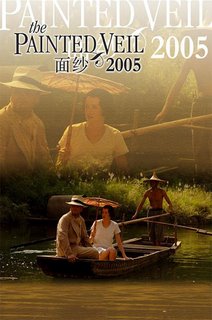 The trailer is now available for the adaptation of Somerset Maugham's The Painted Veil, starring Naomi Watts, Ed Norton, Liev Schreiber and Toby Jones. It hits theaters in December and looks like it might appeal to fans of The English Patient or A Passage to India. (Greta Garbo starred in the 1934 version, fyi.) -- Amy
Posted by Kim at 12:20 PM 2 comments:

Sir Anthony Hopkins has come out of retirement to star in James Ivory's The City of Your Final Destination, an adaptation of a novel by Peter Cameron. Charlotte Gainsbourg and Laura Linney round out the cast, "which follows the story of an Iranian graduate student living in Kansas (Omar Metwally) who travels to Uruguay to ask permission to write the authorised biography of his idol, Latin American author Jules Gund." --Kim
Posted by Kim at 9:34 AM No comments:

SF Event: The May Queens at Madrone Lounge

Tonight Nicki, Michelle Richmond, and I will be reading from The May Queen along with contributors from the anthology Before the Mortgage: Real Stories of Brazen Loves, Broken Leases, and the Perplexing Pursuit of Adulthood. You can read Nicki's interview with Michelle, whose latest novel The Year of Fog will be published by Random House in March, on The Happy Booker. More details here. --Kim

In an exciting development for some of the more zealous fans of Philip Pullman's His Dark Materials trilogy, "New Line Cinema released the first still from the film, which shows Nicole Kidman alongside newcomer Dakota Blue Richards, yesterday," reports The Book Standard. --Kim 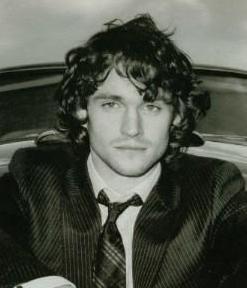 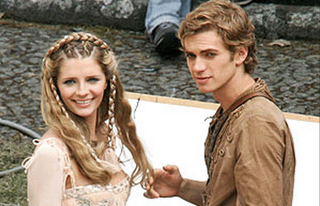 Halloween may be over, but I'm still scared. Very. By this. The idea of Mischa Barton starring in all her ribaldric glory in an adaptation of Boccaccio's The Decameron, a.k.a. the Middle Ages' contribution to the porn industry: a frame narrative about a group of young hipsters from Florence who flee to the countryside to escape the Bubonic plague and end up amusing themselves at their villa by telling bawdy tales. The film, due out in March, has gone through a few different titles, including "Virgin Territory" and "Chasing Temptation" -- presumably their attempt to entice non-English majors who'd be otherwise oblivious to the fact that there's general naughtiness to be enjoyed. FYI, the film also stars Hayden Christensen...you can download the trailer at desiringhayden.net.
-- Amy