I realize we're all still probably a little bit verklempt from watching Jane Eyre — (talk amongst yourselves, as Linda Richman would say) — but don't forget that this Sunday, February 4th, Masterpiece Theater will air an air an adaptation of Philip Pullman's The Ruby in the Smoke.

Here's a summary from the PBS site:

A spunky heroine braves assassins, opium dens, and worse to get to the bottom of her father's mysterious death in this adaptation of Philip Pullman's Victorian-era thriller The Ruby in the Smoke. Pullman's 1985 novel introduced teenage sleuth Sally Lockhart, a self-reliant orphan schooled by her late father in shooting, bookkeeping, and Hindustani.

The story opens in London in 1872. Sally's father, in the South China Seas investigating suspicious activity in his shipping business, has gone down with the schooner Lavinia. After receiving an anonymous letter postmarked 'Singapore' to beware of the 'Seven Blessings,' she asks one of her father's business associates about it; he clutches his heart and drops dead on the spot.

Mr. Lockhart's old friend Major Marchbanks gives Sally a journal that tells the story of the Ruby of Agrapur, which disappeared during the Great Indian Mutiny of 1857. Sally is about to read the passage describing her father's role in this event, when the journal is stolen out from under her! Thus begins a chase leading to dastardly deeds in high places and a shocking revelation about Sally's family history.

British actress and former pop idol Billie Piper (Doctor Who) stars as Sally, the young heroine thrust into the role of detective. Julie Walters (Harry Potter) stars as Sally's nemesis Mrs. Holland, a homicidal crone obsessed with finding the fabulous ruby and convinced that Sally holds the key to its whereabouts.

Also appearing are JJ Feild (To the Ends of the Earth) as photographer Frederick Garland who offers Sally a hideout and avidly joins her high-risk adventure; Matt Smith as Jim Taylor, an office boy fond of "penny dreadfuls" which have taught him a thing or two about crimesolving; and David Harewood (Blood Diamond) in a dual role as the Bedwell twins: one an opium-addicted sailor who was the last to see Sally's father alive, and the other a clergyman not above a fistfight if the cause is just.

Author Philip Pullman is best known for his fantasy trilogy, His Dark Materials, set in a series of alternate universes. By contrast, the Sally Lockhart mysteries are firmly set in the universe of 19th-century sensationalistic fiction. Pullman calls The Ruby in the Smoke an "old-fashioned Victorian blood-and thunder... with a genuine cliché of melodrama right at the heart of it, on purpose: the priceless cursed jewel." Tons of new stills are available from the adaptation of Neil Gaiman's Stardust, with an all-star cast that includes Michelle Pfeiffer, Robert DeNiro, Ricky Gervais, Peter O'Toole, Rupert Everett, Ian McKellan, and Sienna Miller.
Posted by Kim at 8:15 AM No comments: I swooned, I cried, I suffered from Bertha-like fits of hysteria. Just finished watching Parts I and II of Jane Eyre on Masterpiece Theater, and here's what I came away with from the experience. -- Amy

1. Surly bad boys, in any era, are babes.
2. If a man repeatedly calls you a witch, he just might be flirting with you.
3. If your co-worker warns you to keep your doors locked at bedtime, maybe you should be concerned.
4. Play hard to get by telling your sexy boss that you find him physically revolting.
5. When having your fortune read, make sure the guy you're crushing on is not eavesdropping, lest you find yourself completely and utterly mortified.
6. When your boss asks you, "Do you faint at the sight of blood?" prepare for the worst.
7. Reuniting with long-lost cousins and inheriting twenty thousand pounds can be remarkably boring when you could be getting it on with an issue-laden, uber-rich hottie.
8. A red scarf can add flair to the drabbest of gray dresses.
9. It's remarkably fun to watch snobby child-haters get dissed, romantically.
10. It's okay to mess with a blind guy's head -- just a little bit-- in return for the hell he put you through on your almost-wedding day.
Posted by Kim at 11:18 AM 6 comments: Last weekend while watching the series of trailers before Children of Men, seemingly out of nowhere the dear visage of our very own Ioan Gruffudd appeared larger than life--gloriously bedecked in period clothing, looking (and sounding) awfully elegant and heroic (v. Horatio-like), and backed by the rousing strains of "Amazing Grace." I immediately went into raptures and (to my boyfriend's consternation) almost hyperventilated. You've been fairly warned. Watch the trailer for Amazing Grace, the story of an 18th century abolitionist's fight to end slavery, here. Rufus Sewell (Middlemarch, etc.) and Albert Finney costar. --Kim

Image: Still from Amazing Grace
Posted by Kim at 10:07 AM 3 comments:

Screenhead lists "The 13 Most Unfilmable Novels," including The Confederacy of Dunces and Ulysses. --Kim
Posted by Kim at 9:21 AM No comments:

Is a Novel Truly "Unfilmable?"

'Perfume' was not the first book to be labelled 'unfilmable', but this is clearly a misnomer. In every case I can think of filmmakers have found ways of bringing all kinds of 'difficult' books to our screens, and 'difficult' can mean a range of things, from excessive violence and drug taking to sexually explicit content and problematic story structures. (Time Out London)--Kim 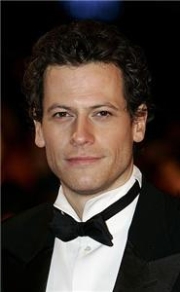 Following the lead of fetching film seafarer Ioan Gruffudd, Emma Thompson (a.k.a. our beloved Eleanor Dashwood) has spoken out against Burberry's decision to close its Wales factory and outsource production to China.

Why, you ask, do we continue to report (ad nauseum some might say) about the ongoing Burberry brouhaha? One could argue that we only care about the ill-advised corporate decisions of that bastion of fine British apparel because it gives us a flimsy excuse to run ever more pictures of his eminent hotness, Mr. Midshipman Hornblower. In that case, you would be arguing correctly. -- Amy
Posted by Kim at 4:35 PM 1 comment:

Reader, I Tivo'd It

The bad news: Your New Year's resolutions lasted, oh, all of about three days, and your 1099s are starting to arrive in your mailbox; a cruel reminder of what you'll soon have to shell out to Uncle Sam. (What's that? You're expecting money back? I hate you.)

The good news: At the end of this month, we've got a new Masterpiece Theater to look forward to -- from a Bronte sister, no less! Jane Eyre stars newcomer Ruth Wilson (a poor man's Liv Tyler?) in the title role alongside Toby Stephens's surly Mr. Rochester, and is directed by Susanna White, who was behind last year's marvelous production of Bleak House. Jane Eyre premieres on PBS on Sunday, Jan. 21 and concludes the following Sunday, Jan. 28.

You can catch a sneak-peak of the mini-series at the Masterpiece Theater web site. (Sigh.) Only a story this good could have you pining for men who keep crazy exes locked up in their attics.

Up next on Masterpiece Theater: Bram Stoker's "Dracula" and Philip Pullman's "The Sally Lockhart Mysteries: The Ruby in the Smoke." Check here in a few weeks for more info. -- Amy
Posted by Kim at 3:34 PM 4 comments: 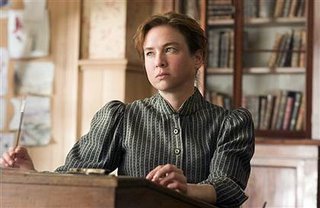 Feel free to weigh in and give us your opinion if you've seen it. It supposedly has a Finding Neverland feel to it, from what I've read. -- Amy
Posted by Kim at 11:04 AM No comments: