Apparently sick of having people call her an unworthy casting choice for the role of Jane Austen in the upcoming biopic, Becoming Jane, Anne Hathaway is speaking out.

What do you think of "Princess" Anne in the part? -- Amy

If you didn't get your fill of Queen Elizabeth I when Cate Blanchett portrayed her in a 1998 feature film -- or in PBS's miniseries last year -- now's your chance to see how HBO puts their spin on the Virgin Queen. (It's HBO mind you...something tells me she might not live up to her nickname in this version.) This two-parter, airing April 25 and May 21st , might more appropriately be dubbed "Liz: The Later Years" as it stars Helen Mirren and features Jeremy Irons as the Earl of Leicester. Hugh Dancy also stars as the Earl of Essex, but that does little to make up for his appearance in the upcoming abomination (or so I predict), Basic Instinct 2. Oh Hugh...for shame.

Also, Ain't It Cool News recently reported that Blanchett has indeed signed on for a sequel to her film (there had been rumors to the contrary.) Geoffrey Rush will reprise his role as Sir Francis Walsingham and Samantha Morton will apparently play Mary, Queen of Scots. -- Amy

Who Is Evelyn Nesbit?

Apparently, a woman worth killing for....

Check out the drama in a PBS documentary, Murder of the Century, tonight at 9 p.m. Here's more about the story.... -- Amy 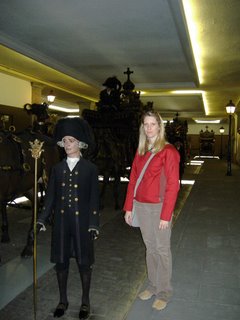 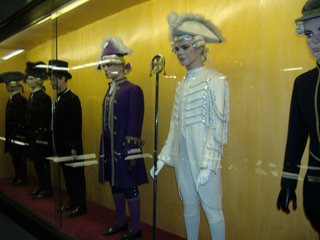 I recently returned from an incredible trip to Barcelona with my friend and co-author, Meg. In addition to seeing the usual feats of astonishing Gaudi architecture, buying espadrilles and eating churros y chocolate — muy delicioso! — we also sojourned a bit off the beaten track to the Museum of Funeral Carriages. Realizing this would satisfy our mutual love for all things historical/morbidly creepy, we made our way to Carrer Sancho de Avila. After getting lost and stumbling into an actual funeral home (where several funerals were underway -- whoops!) we eventually made our way to the offices next door.

After an awkward, 15-minute wait in the lobby (witnessing half a dozen grieving family members arrive to make arrangements for the deceased), the security guard finally motioned for us to follow him into a maze of hallways to an elevator, which led us down into the building's dark basement. I attempted to practice my very poor Spanish with the guard, who spoke not a lick of English.

At this point, FREAKING OUT from the utter randomness of this experience, Meg and I are merely trying to stifle our VERY nervous laughter as we stumble into the pitch black basement. The guard switched on a battery of fluorescent lights to reveal a rather bizarre showcase of 12 to 15 funeral carriages from different periods in history, complete with teams of fake, lifesize horses and scary-looking coachmen in powdered wigs, breeches and tricorn hats. (Now I know where Sears mannequins go to die.) Considering Meg, the security guard and I were the only ones rambling through this eerie set-up, it was a most unusual experience. We suspect that the mannequins actually come alive at night in some sort of "Twilight Zone" scenario. This museum exhibit may not be for everyone, but I reckon there are more than a few "Romancing the Tome" fans who would get a kick out of it. Best of all, it's free! -- Amy

Depp Gets Down and Dirty in The Libertine 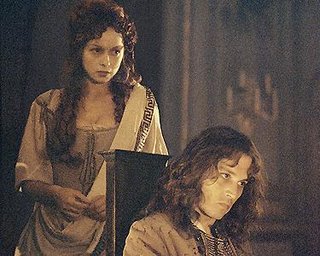 At the beginning of The Libertine, Johnny Depp as the Earl of Rochester warns the viewer that we will not like him. (He doesn't mention that we might not like the film either, but it was implied.) And EoR does a great job thereafter of doing everything humanly possible to ensure that we don’t... like him, that is. Tramping through muddy streets and orgy-infested St. James Park, he sneers constantly, makes nasty comments, ridicules his friends (though they seem to like it), treats his wife shabbily, leads his young male friend and lover into a desperate situation and then leaves him to die. Yes, The Libertine is certainly dark and the Earl’s miserable attitude rings true. What else were Aristocrats up to during the Restoration? With a backlash against Puritanism in full effect they apparently had nothing else to occupy their free time besides the theatre, prostitutes, and pondering philosophical questions about happiness and love (you know, they didn't have Walmart or television to entertain them). But watching it through an entire movie is exhausting, particularly when the dialogue is not as clever as it thinks it is. Then, just when you think the Earl is on his deathbed, like a psychotic killer in a slasher movie, he’s back up hobbling about for a last battle before succumbing, to syphilis of course. His good looks consumed on the outside just as bitterness has eaten away at his soul. Though, even severely pockmarked with his “flesh” peeling from his face, Depp manages to look hideously beautiful. That, plus the sets and costumes, make this worthy of a spot on your Netflix queue--just don't say he didn't warn you. A better, more complete review here. --Kim
Posted by Kim at 11:46 AM No comments:

John Cusack will star in an adaptation of StevenStephen King's short story "1408," about a paranormal investigator who is terrorized in room 1408 at the Dolphin Hotel. Was Fox Mulder not available for this assignment? --Kim
Posted by Kim at 4:30 PM 2 comments: