Chris Askew on Withnail and I

My sister, Chris, recently watched Romancing the Tome favorite Withnail and I for the first time. Here are her thoughts on this cult flick, which happens to be a perfect accompaniment to any mid-winter ennui one might be feeling. --Kim 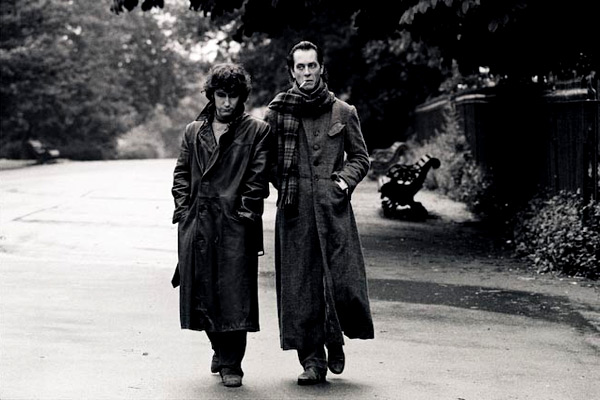 When I sat down to write this little love letter for Withnail and I, it was, of course, mandatory to quote at least a few of those wonderfully memorable lines. The trouble came when trying to settle on which ones to use. It's all so brilliantly written. Line after line of hilarious, witty, and unique dialogue. When Uncle Monty discusses his fondness for (ahem...) gardening: "I think the carrot infinitely more fascinating than the geranium. The carrot has mystery. Flowers are essentially tarts. Prostitutes for the bees." I cracked up when Withnail and Marwood approached the farmer in a desperate attempt to obtain food and warmth after they've come to the country cottage completely unprepared "We've come on holiday by mistake!" "We're not from London!" but although I laughed from beginning to end, the film is as heartbreaking as it is funny. Along with all the wit and fun is a moving coming-of-age story about outgrowing a lifestyle and outgrowing a friendship. We see throughout the film that Withnail is a self-serving coward "It's you he wants! Offer yourself to him!," but we like him still. We are laughing and loving watching Withnail drink the lighter fluid and the both of them digging in the sink:
"Something's floating up!!"
"What is it?"
"It's MATTER!"
We are laughing and loving it but we know it can't last. We know their lifestyle is robbing them of ever fulfilling their hopes and dreams... and it is clear that although Marwood is prepared to take the risk of leaving the comfortably familiar for the challenges of the unknown when he takes a job in Manchester, Withnail will stay behind, continue to deteriorate and very likely lose what little of a life he has left. And so it is bittersweet when we watch them say goodbye knowing somehow that they will never see one another again. In reality, that is exactly what happened to the writer/director Bruce Robinson and his Camden flatmate and close friend Vivian MacKerrell who was indeed the inspiration for Withnail. The two parted ways when Robinson realized he had to end their friendship or he wouldn't survive to tell the tale. Apparently the lighter fluid scene was based on a very real incident which left MacKerrell blind for days! --Chris Askew
Posted by Kim at 10:19 AM

Email ThisBlogThis!Share to TwitterShare to FacebookShare to Pinterest
Labels: Richard E. Grant, Withnail and I