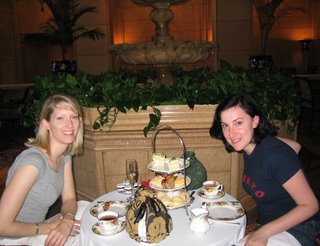 Although Kim and I continue to debate the merits of downtown Los Angeles, we're both in agreement that high tea at the Millenium Biltmore hotel is a bright spot in the metropolitan melange. We partook of the "Empress Afternoon Tea" at the hotel's Rendezvous Court on Friday afternoon, and here's how it measured up. -- Amy

TEA: Although the selection was limited, we both enjoyed our tea choices. Following a glass of champagne each, we forgot to make note of exactly which tea we ordered. Afterwards, the sugar buzz had zapped our memory completely. So excuse the lack of specifics.
Rating: Four sugar cubes

SANDWICHES: Egg salad, smoked salmon, cucumber and ham & cheese. Though not exactly bowled over by originality, we wouldn't have wanted anything too avant-garde. The classics never disappoint.
Rating: Five sugar cubes

SCONES: We had to wait for a new batch of scones to come out of the oven, but it was worth the wait. Though preciously diminutive, we were generously allowed five, AND offered more after we polished them off. (We had enough discipline to decline extras.)
Rating: Five sugar cubes

SWEETS: Believe it or not, we're often put off by afternoon tea services that offer too many sweets. (Because after gorging on sandwiches and scones, one still feels obligated to eat every last delectable dessert, thus feeling like a penitent porker by the time one is finished.) In this case, the Biltmore wisely kept the dessert plate to an appropriate three items per person: White chocolate mousse topped with fresh fruit in a crisp, edible cup, a lemon bar topped with slivered almonds and, the chaser -- a chocolate truffle.
Rating: Four sugar cubes

ATOMOSPHERE: The room itself was beautiful: High, intricately painted ceilings with wooden beams, a fountain and a grand staircase leading to the second floor. There was no harpist (but we certainly survived without a flourising rendition of the Titanic theme song...) On the downside, the hotel lobby restroom was appallingly institutional (read: high school lavatory). Still, the hotel has loads of cool history. There are old black and white photos from Academy Award ceremonies of yore, and legend has it, the Black Dahlia's ghost still lurks in the lobby. (A hotel doorman was the last person to see Elizabeth Short alive.) Kim found the photo of a dapper Jimmy Stewart accepting an Academy Award for Philadelphia Story particularly swoon-worthy.
Rating: Four sugar cubes