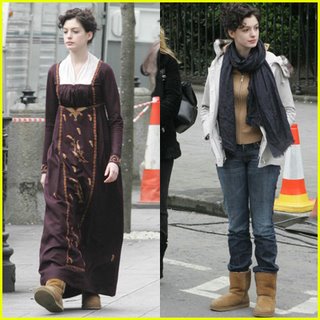 Ant sends us a link to several pics from the set of Becoming Jane, where Anne Hathaway is busy portraying Jane Austen. James McAvoy (whom I adored as Mr. Tumnus the Faun in Chronicles) will play Jane's Irish suitor.

"Becoming Jane Synopsis :: Jane Austen has a romance when she was about the age of 20 with a young Irishman named Tom Lefroy. His family disapproved of the match because Austen had little money and Tom was the oldest in the family and had quite a few people to support, so he needed to marry into money. So his family sent him away when it looked like things were getting serious between the two of them. A few years later she wrote the first draft of what turned out to be Pride and Prejudice--it's believed she loosely based Elizabeth and Darcy on herself and Tom, but made Darcy rich enough that he could marry who he chose."
Posted by Kim at 10:07 AM