Something Adapted This Way Comes 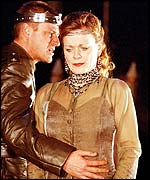 Variety reports that Sean Bean (pictured) and Tilda Swinton will star in "Come Like Shadows," an adaptation of Macbeth described as "a period piece designed for a contemporary audience." The film will be set in Scotland and directed by The Jacket's John Maybury. Steven Soderbergh is the executive producer. Great casting choices, if you ask me -- Bean played Macbeth on the London stage in 2002 in a performance several reviews described as "raunchy." Hmmm. Incidentally, my friend, Meg, just saw the Scottish play performed in Central Park, with none other than Jennifer Ehle (P&P's Elizabeth Bennett) as Lady Macbeth. Here's what she had to say about it.

Also filmbound: Marley & Me, John Grogan's uber-bestselling account of 13 years spent with a very bad dog. -- Amy
Posted by Kim at 11:56 AM