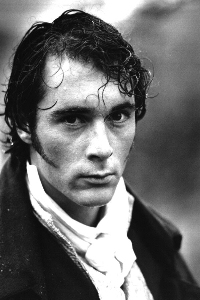 "What care I for colds when there is such a man?" --Marianne Dashwood, Sense and Sensibility