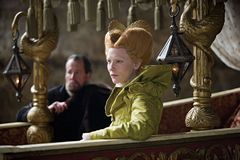 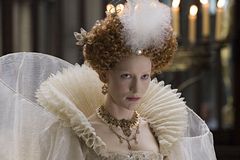 Incidentally, here's what Cate told The Guardian about her decision to do the sequel:
"...I don't think I wanted to play Elizabeth I in the first place. I remember reading the script and saying, 'Wow, this is going to be an ego trip for someone, but it's not going to be for me' - but there I was, having the ego trip. ...I've remained really good friends with Shekhar [Kapur, the director], and he and Geoffrey Rush had been talking about [the Elizabeth sequel] The Golden Age for a long time. I kept saying no because I couldn't see why. But suddenly there was this fantastic script that had the potential to talk about a woman approaching middle age; and I thought that, if the first film was about denial, this one, in a way, is about acceptance of that ageing process."
Posted by Kim at 6:05 PM