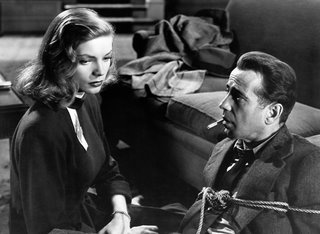 I was watching La Haine the other night, when one of the characters used the slang expression, "Don't Bogart it." It reminded me that neither Amy nor I had blogged about our recent viewing, at the Hollywood Forever cemetery screening, of Raymond Chandler's The Big Sleep.

Howard Hawks directed the movie and William Faulkner wrote the screenplay. Prior to the screening, we were told that Hawks and Faulkner had to call Chandler because, after re-reading the novel several times, they still couldn't figure out who'd shot one of the characters. Chandler said he didn't know. But really, it doesn't matter. The movie is all about the chemistry between the two leads. As with the couple's first film To Have and Have Not, it's steamy. Witness the following exchange, snagged from IMDB:

Vivian: Speaking of horses, I like to play them myself. But I like to see them workout a little first, see if they're front runners or come from behind, find out what their whole card is, what makes them run.
Marlowe: Find out mine?
Vivian: I think so.
Marlowe: Go ahead.
Vivian: I'd say you don't like to be rated. You like to get out in front, open up a little lead, take a little breather in the backstretch, and then come home free.
Marlowe: You don't like to be rated yourself.
Vivian: I haven't met anyone yet that can do it. Any suggestions?
Marlowe: Well, I can't tell till I've seen you over a distance of ground. You've got a touch of class, but I don't know how, how far you can go.
Vivian: A lot depends on who's in the saddle.