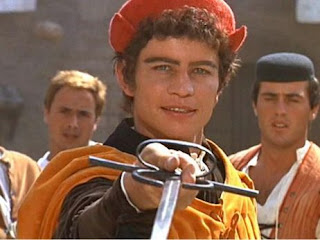 And but one word with one of us? couple it with
something; make it a word and a blow.  --Tybalt

I'm really enjoying the new BBCRadio4 podcast series Shakespeare's Restless World, hosted by British Museum Director Neil MacGregor. The series explores the bard's world via objects such as The Stratford Chalice, an excavated monogrammed fork found at the site of the Rose Theatre, and a rapier unearthed on the banks of the Thames. Topics included urban violence (think Mercutio and Tybalt's tragic sword fight) and snacking habits of the Elizabethan theatre-goer. (I couldn't help but wonder if Elizabethans also bemoaned the high cost of concession snacks...) You can find out more and see photos of the objects from the series here. --Kim