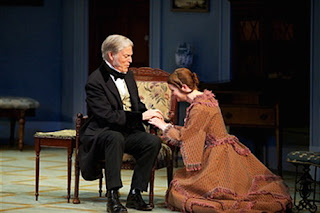 Amy and I saw Richard Chamberlain in The Heiress at Pasadena Playhouse a couple of weeks ago. It was a brief respite in what has been a frenetically paced couple months of writing for the two of us (exciting project tba). We wanted to shout "Thornbirds" when Chamberlain appeared onstage as the play opened, but well-bred women (cough) that we are, we instead clapped with the rest of the enthusiastic audience. The Heiress was first adapted in 1947 from Henry James' 1880 novel Washington Square. Olivia de Haviland and Montgomery Clift starred in the film adaptation in 1949. If you haven't been to the Pasadena Playhouse, it's gorgeous. From our archives, Amy's hilarious description of our Thornbirds film festival : RomTome Hall of Fame: The Thornbirds.
Posted by Kim at 3:21 PM