Out on DVD: Mitford Mania! 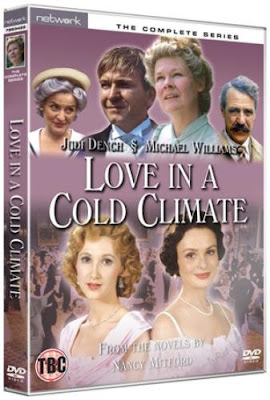 Available for the first time on DVD in North America is the 1980s Masterpiece Theater miniseries "Love in a Cold Climate," based on the hilarious and charming autobiographical novel of the same name by Nancy Mitford (as well as her other tome, The Pursuit of Love). Judi Dench stars as "Lady Alconleigh," the long-suffering matriarch of the prettily precocious brood of "Bright Young Things."

If you've never read the works of Nancy, or Decca Mitford's Hons & Rebels (or a non-fiction biography of this outlandish family), add it to your list immediately. You won't be disappointed. From their crazy antics as kids to shocking elopements and even more shocking political leanings, I find myself sort of obsessed with the whole lot. I'm currently wrapped up in Decca: The Letters of Jessica Mitford, which I stole from Kim's personal library.

Has anyone seen this miniseries, and can you vouch for it? I've been disappointed by other film and TV renderings. (Nothing can quite capture the comedy of the books.)