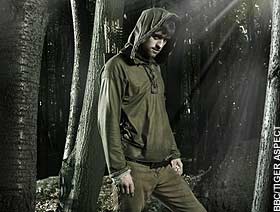 With the recently stolen tapes of BBC's new Robin Hood series now back in safe hands, the show is back on track for its premiere on Saturday night in England. (We Yanks will have to wait until next spring before it starts airing on BBC America.) The Daily Telegraph has an interesting article on how creator Dominic Minghella tried to update the legend. (Robin now has a "gang," not a band of "merry men," for instance. And oddly enough, he based the show's hero on none other than British chef, Jamie Oliver. Let's at least hope that, unlike Jamie, he doesn't have a pronounced lisp.) -- Amy
Posted by Kim at 11:34 AM