Perfume: The Smell of Success? 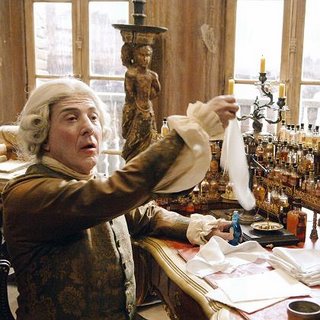 The Guardian wonders whether Tom Twyker's adaptation of Patrick Suskind's Perfume can actually measure up to the novel. Apparently, such directorial big wigs as Stanley Kubrick, Tim Burton, Ridley Scott and Martin Scorsese had been previously connected with the film before each decided that the novel was "unfilmable." Considering the book relies so heavily on the aspect of scent, I can see the dilemma. Nevertheless, Twyker's movie (starring Dustin Hoffman, Alan Rickman and newcomer Ben Whishaw) promises to be one of the big hits of the year, according to The Guardian's Jess Smee. The movie is set for release on December 27. -- Amy
Posted by Kim at 10:54 PM