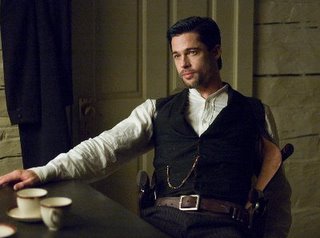 While Pitt won't be playing a gay outlaw just yet (unreliable word is he's trying to find the right role), he will be portraying gunslinger Jesse James in the adaptation of Ron Hansen's novel The Assassination of Jesse James by the Coward Robert Ford. Casey Affleck, Sam Rockwell, Mary-Louise Parker, Zooey Deschanel, and little Brooklynn Proulx costar. And, oh yeah, there's this nude scene "everyone's" talking about.

I've met Ron so perhaps I can wrangle some behind-the-scenes info for you in the near future. He also penned the bestselling and critically-acclaimed National Book Award nominee Atticus and the wonderful Mariette in Ecstasy.--Kim
Posted by Kim at 9:05 AM