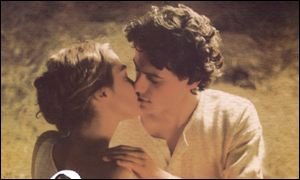 This weekend, per Amy's recommendation, I watched the tearjerker Solomon and Gaenor starring our favorite actor and Welsh export Ioan Gruffudd (pronounced Yo-an Griffith). Quite the melodrama, the movie tells the story of star-crossed Gaenor, a protestant from a mining family, and Solomon, the beloved son of a Jewish merchant. To avoid being cast out by his family, Solomon hides his true identity from his love and her predictably insufferable family, which includes a hard-drinking, hard-living bully of a brother and a Bible-thumping patriarch. Their many secret trysts include, but aren't limited to, a literal roll in the hay. Ioan (who learned Yiddish for the role) is oft-times shirtless and reliably adorable, even if I did roll my eyes a bit at his character’s lame ambivalence and the somewhat soporific denouement. While dependably trite, the film is worth watching for obvious reasons. --Kim
Posted by Kim at 4:02 PM