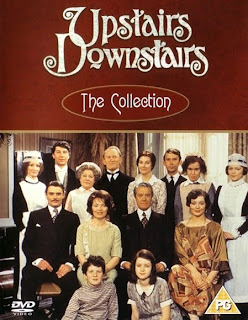 Kim and I committed ourselves to watching the entire Upstairs, Downstairs series last year, and while we thought it was charming, we never got more than three episodes in.

Luckily, we'll get the Cliffs Notes next year on Masterpiece Classics when a new PBS/BBC co-production offers us another telling in three installments.

From a PBS press release earlier this year: "An enormous success worldwide, the original Upstairs Downstairs won seven Emmys during its run on MASTERPIECE THEATRE in the mid-1970s–including Best Actress for Jean Marsh, who will reprise her role in the new three-part series as Rose, the parlor maid. Dame Eileen Atkins, the co-creator of the original program, will also star. Screenwriter Heidi Thomas (Cranford) is setting the new Upstairs Downstairs in the same house at 165 Eaton Place in 1936, during the period leading up to World War II."


If you enjoyed the original series, you might enjoy seeing some of the cast reunite at this BAFTA awards tribute: