He Knew He Was Right 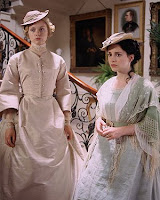 Okay, so Kim and I only completed Disc One so far from this 2004 Andrew Davies adaptation of the Anthony Trollope Novel, but let me weigh in:

The movie is a veritable Who's Who of British actors, the problem being, Kim and I kept saying, "Who is that?" every five minutes, since we couldn't immediately place them. It made for a fun guessing game during the viewing. Then there was Matthew Goode, who effectively elicited our giddy screams when he appeared in his first scene. Charming. Lovable. Swoonworthy.

The movie is a fine amalgamation of over-the-top angst mixed with superficial silliness. Kim and I preferred the latter, specifically Dr. Who's William Tennant and his pathetic gambits for finding a wife with the equally annoying French sisters. We also loved the no-nonsense Priscilla Stanbury and her cranky-pants dowager aunt.

The annoying bit tended to be Louis "I know you're a tramp" Trevelyan and his "Whatchootalkinbout,willis?" wife, Emily. Too bad "Cheaters" wasn't around when Louis needed some surveillance done. Instead, he relied on a not very reliable Mr. Bozzle to keep tabs on his missus to make sure she wasn't testing the feather bed with her godfather (played to deliciously skeevy effect by Bill Nighy.)

As an aside: We hated the "What?/There, I did it!" asides that all the characters periodically pulled with the camera. When will directors realize this is a totally lame gimmick?