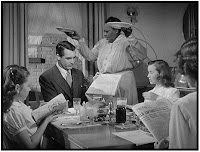 Finally getting a chance to post about our viewing last week of Mr. Blandings Builds His Dream House, starring Cary Grant and Myrna Loy. What a treasure! This was appreciated after our previous movie night featuring A New Kind of Love, which even though it starred the incredibly handsome Paul Newman (and was, strangely, nominated for 2 Oscars and a Golden Globe), kinda sorta made our eyes bleed.

Ad exec Cary Grant (titular Mr. Blanding) is supporting his devoted, yet materialistic wife and 2.5 precocious children, plus a stereotypical maid (it's 1948), on $15,000 a year, but living in your typical shoebox New York apartment. His wife wants to pay a decorator to redesign the apartment, but Grant has a better idea: Why not buy an historic fixer-upper in the suburbs? Starry eyed over a shared vision of their dream house, the Blandings are easily hoodwinked into purchasing a lemon that they can't afford (how apropos!). Their wiseacre friend, played by Melvyn Douglas adds a wry touch as do some of the local yocals.

Who cares if seven years later Jim and Muriel Blandings metamorphose into Frank and April Wheeler from Revolutionary Road, in this movie the American dream is still a wonderful thing. --Kim
Posted by Kim at 10:35 AM