To celebrate the launch of Tempestuous, the first book in our Twisted Lit series, we're featuring guest bloggers all week. Today's guest is the inimitable Edward Champion of Return of the Reluctant and The Bat Segundo Show, the celebrated literary podcast on which he's interviewed Martin Amis, Kate Christensen, David Mitchell, Michelle Richmond, China Mieville, and Joyce Carol Oates, to name but a few. Thanks so much, Ed, for stopping! 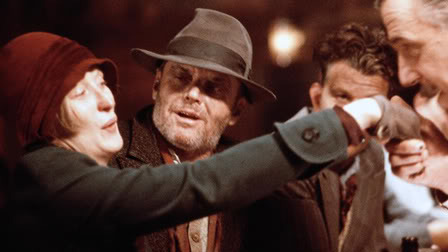 It's criminal enough that the great William Kennedy doesn't get talked up nearly as often as he should by the highfalutin dopes who ignore regular Joes for the dry literary dregs in the tea room.  Even so, I've always wondered why nobody mentions the 1987 film adaptation of Ironweed.  I've been just as guilty as the next guy in ignoring this flick for such questionable allure as Eric Roberts's oeuvre.  (You'll have to corner me in a bar to learn just how many times I've seen the Best of the Best movies.)  So when Kim asked me to gab wise about literary flicks in a guest post, I decided to take it on.

The book is a tough and taut portrait of the invisible souls who seek shelter from a cold world while holding as hard as they can to their fragile dollars.  They try to redeem their failed lives through singing and toiling and laughing and drinking, but they are as dead to genteel eyes as the souls buried beneath the ground at Saint Agnes Cemetery.

The movie sounds like a golden trumpet on paper.  Get Bill Kennedy to adapt his plucky masterpiece.  Have Jack Nicholson star as gritty drifter Francis Phelan, with Meryl Streep as his sidekick Helen, and the prestige picture would sail its way into a peninsula of golden statues. (It came within spitting distance.  Nicholson and Streep were both nominated for Oscars.)

There was just one problem: Héctor Babenco was a fairly toothless director.  Maybe Babenco could not grasp the rough feel of American transicence.  Perhaps he was intimidated by his star power.  He is too fixated on the new high-speed film stocks of the time for the night scenes and his awkward Steadicam shuffles don't make this film crackle with the vital life Kennedy established in his screenplay.  Nicholson delivers an early grief-stricken monologue kneeling before a grave, but without Kennedy's prose capturing the cemetery's souls receiving his words.  Babenco doesn't know how to block Nicholson's niceties with a soft touch, and the moment feels needlessly inert, as does another pivotal scene in which Helen sings at a bar.

Nor does Francis lose “two thirds of a right index finger with a cleaver,” which neuters Kennedy's efforts to present the savage truths of the street.  And don't get me started on the way Babenco handles the dead people who haunt Francis, who are all dressed in white and are photographed in that chalky and stitled manner that was a visual cliche in low-budget television anthology series during that decade.  For those who like to track the careers of minor actors, Ironweed contains some oddball casting: a young Nathan Lane cast as the scab Francis killed years before, a pre-Roseanne Michael O'Keefe as Billy Phelan, and Tom Waits as Francis's fellow laborer, Rudy.

On the other hand, there's energy in the 1901 trolley strike that recalls John Sayles's deft hand in Matewan.  And if Rosskam does not quite sprout to life with his judgmental modifiers (“tidy,” “impatient,” “insensitive”) as Francis toils for him, he is given some heart and heft by character actor Hy Anzell.  It's astonishing to recall that there was once a time in which movies about the homeless and labor were actually bankrolled and released.  These days, our hefty films involve the anticlimactic novelty of Bill Murray as Roosevelt and Spielberg establishing a preprogrammed reaction in which all leave the theater with the same conclusion.

Ironweed reminded me of Fielder Cook's surprisingly edgy 1986 adaptation of Saul Bellow's Seize the Day.  You know pretty early on that it's not going to work and that the director is overcompensating.  Yet there's a bare minimum in which the scripts are trying to make the source material come alive.  Presumably, it was this life that attracted stars like Jack Nicholson and Robin Williams.  Did hacky directors tend to become attached to the low-key literary adaptations of the 1980s because the producers couldn't find any other people to direct them?  It was certainly a weird and soulless decade, but you have to hand it to American cinema: there were more heartfelt efforts back then to realize literature than today.  --Edward Champion
Posted by Kim at 6:00 AM