Quoth the Raven: "Yo, Adrian!" 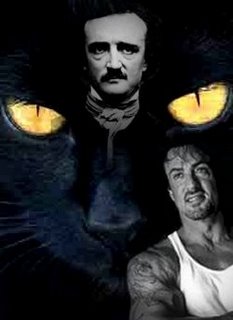 As we noted here a while back, Sly Stallone has plans for a biopic on the life of macabre poet and storyteller Edgar Allan Poe. (Contrary to the accompanying image, the film will not include a dancing, bewhiskered character called "Magical Mr. Mistoffelees.") While Robert Downy Jr. had been named in connection with the role, he's since denied he'll be playing the author, and I can't seem to find any news of who will be, although Johnny Depp has mentioned in the past that he'd love to play Poe, and how friggin' cool would that be? (Although I can't imagine Depp and Stallone in the same room together, let alone Stallone actually directing Depp.)

Sly has already written the script, and let's just say we can only hope it's more in the ilk of "Rocky," Part I, and less in the ilk of "Tango and Cash," "Demolition Man," "Judge Dredd" and the inimitable "Stop! Or My Mom Will Shoot."

Here's what Stallone had to say about the movie according to the official Rocky Balboa blog:

SYLVESTER STALLONE: I'm gonna direct "Edgar Allen Poe" [without] being in it. "Yo, Poe!" doesn't work. I'd like to direct some nice young actor in it who can get the soul of Poe. It's a dark story, but the challenge is how to make it enjoyable, so it isn't that depressing. And then there's a book I've been looking at for a while called Homefront, which is pretty good and, you know, there's certain things that will crop up. The main thing is I'd, I'd much rather spend more time directing than actually acting.

A non-depressing view of Poe's life? Good luck with that one. (I'm thinking "Homefront" may be the book by Tony Christini about the Iraq war, f.y.i.) -- Amy
Posted by Kim at 2:20 PM